Everyone knows they should eat more vegetables, but only 7% of Americans actually eat the recommended number of fruit and vegetable servings each day. Maybe you buy produce that spoils after weeks in your refrigerator because you don’t know how to prepare it, or you’re just sick of the same salad or baby carrots every day. If you need a refresher to liven up your veggie repertoire, these ideas are for you.

Here are five of my favorite less-common vegetables that can shake up your veggie consumption and get you looking forward to eating vegetables again: 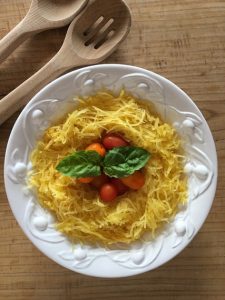 Spaghetti squash is gaining in popularity as a grain-free pasta alternative. It is rich in vitamin C, manganese, and vitamin B-6, low in calories, and is super easy to grow in a home garden or find at a farmer’s market. It provides the same mellow flavor as zoodles (zucchini “noodles”) but is easier to prepare because it doesn’t require a spiralizer or special tools. Simply cut squash in half length-wise, scoop out the seeds, place cut side down in a shallow baking dish with about ½ inch of water, and bake in a 350-degree oven for about an hour. The squash is done when you can easily pierce the outer shell with a fork. Let it cool for a few minutes, then use a fork to gently scrape the flesh of the squash out of the shell. It will naturally divide into spaghetti-like strands (hence the name) and tastes great topped with marinara sauce or pesto.

Unrelated to the Jerusalem artichoke, which is a root vegetable, the globe, or French, artichoke has multiple spine-tipped green leaves and is actually the edible bud of a flower. Artichokes have a rich buttery flavor and are super high in fiber, vitamin C, and magnesium. They are a great “probiotic” food, which means they create an environment in the gut that allows good bacteria to thrive, supporting healthy intestines and overall health. But the many spiny leaves and uncertainty around exactly what parts are edible can scare people off from including this delicious food in their veggie repertoire.

To prepare an artichoke, wash it under cool water, then use a sharp knife to cut off and discard the bottom stem at the base where the stem meets the leaves. Removing the tops of the prickly leaves is optional, but makes for easier handling of the artichoke when eating it. Using a sharp serrated knife and a sawing action, cut off the top 1” of the artichoke, then use a kitchen shears to snip off the thistly tip of the remaining leaves. Place artichokes on a steamer rack in a large pan, adding enough water that it reaches just below the steamer rack. Heat on high until boiling, then cover and reduce heat to simmer. Check water level while cooking and add more water if necessary to prevent pan from drying out. Cook 25-35 minutes (more for larger artichokes) until outer leaves can be easily pulled off. 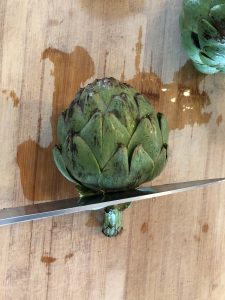 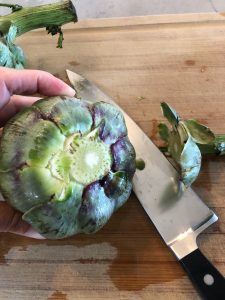 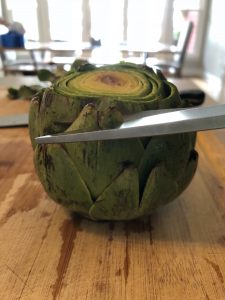 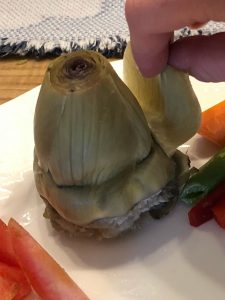 Unlike the marinated variety found in cans, parts of the steamed globe artichoke are too fibrous to eat and are simply discarded (or composted!). Starting at the base of the artichoke, pull leaves off one at a time. Grasp the leaf by the tip and, if desired, dip the base of the leaf in lemon-seasoned olive oil or vegan hollandaise sauce. Place the leaf in your mouth, pulling the base through your teeth to remove the fleshy part and discarding the remaining fibrous top portion of the leaf. Continue until all petals are removed. The tender inner purple-tipped leaves can be removed all at once. Dip and eat the light-colored portion of these leaves, discarding the purple tops and leaving the fuzzy “choke” at the center of the artichoke. Using a butter knife, separate the choke from the base (heart) of the artichoke and discard the fuzzy choke. The choke should pull away easily. What remains is the heart, considered by many to be the best part of the artichoke, which can be eaten in its entirety.

Despite being a tuberous root, jicama is actually considered a non-starchy vegetable, so you can fill up on the sweet crunchy veggie without worrying about negatively impacting blood sugar. It is high in vitamin C and potassium, and one serving contains almost a quarter of your recommended daily fiber intake. To eat, use a carrot peeler to remove the rough outer brown skin, then cut the white flesh into matchsticks. Eat raw with your favorite dip or sprinkle with chili powder, sea salt, and lime juice. Jicama is also great cut into summer salads.

Most people are familiar with cabbage, but the soggy overcooked variety has given it a bad rap, and many don’t think about eating it raw. Raw red cabbage is super sweet, crunchy and packed full of phytonutrients, making it a vegetable that’s definitely worth adding to the rotation. Plus, it keeps in the refrigerator longer than most leafy vegetables, so it is a good staple to have around. To eat, peel off any outer discolored leaves and wash the head under cool water, then cut three or four ½-inch thick slabs from the head, wrapping the uncut portion and storing it in the refrigerator. The cabbage slices will naturally divide along the leaf lines into smaller sections, or you can cut across the slabs to form bite sized cubes. Serve it raw with your favorite dip. For kids, red cabbage is especially appealing with other brightly colored vegetables as a “veggie rainbow”. 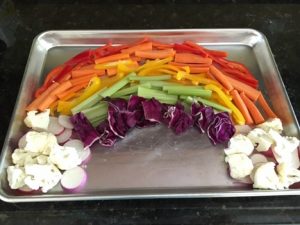 The first time I had swiss chard it was soggy and unseasoned, and I wasn’t a big fan. But after I planted it in my garden on a whim (I’d heard it was easy to grow), I had to figure out what to do with it, and now it’s a staple! Swiss chard is super healthy—its dark green leaves are among the most nutrient-dense foods available—and it is a great source of vitamins A, K, and many others. What’s more, if you’re eating a plant-exclusive diet, dark green leafy vegetables like chard can be an important source of iron.

There are lots of ways to prepare and eat swiss chard. Add chard to green or fruit smoothies with a teaspoon of lemon juice (citrus increases iron absorption), or slice it thinly and add to salads. Use it raw as a “wrap” with sandwich fillings or in spring rolls by removing the tough stem part and rolling it around your favorite fillings. Or enjoy it steamed or lightly sautéed, which mellows the flavor and may increase nutrient availability. To cook chard, wash the leaves and remove the thick portion of the stem. Coarsely chop the leaves into 2 inch strips, then place them in a sauté pan. Stir in a tablespoon of water, a pinch of sea salt, a little minced garlic or garlic powder to taste, and a teaspoon of lemon juice. Cover and heat over medium burner just until wilted. If you’d like, you can also eat the stems-just chop them finely and start them cooking before the leaves since they take a little longer to become tender. If you prefer, you can also chop and freeze the stems for later use in soup or stew.

Eating a wide variety of vegetables not only staves off veggie boredom, it’s also associated with a reduced risk of cardiovascular disease, stroke, type II diabetes, some cancers, and dementia. Whether you’re eating one of the five veggies described here, or any other, try adding an additional serving of veggies every day until you’re up to the recommended 5-10 servings daily.